Bali island is surrounded by around 17500 islands which all unity in Indonesia widest Archipelago in the world. There are so many choices to explore beyond Bali Island and seems sometime time always not enough to explore the vast archipelago. Some points of interests and our focus this time are as follow:

Yogyakarta, affectionately called ‘Yogya’, is a delightful blend of the old and the new. At its core is the elegant Sultan’s Palace (built in 1755), purveyor of traditional Javanese arts:batik-making, mystical keris swords and the Ramayana epic portrayed in wayang kulit (shadow puppet) plays and dance. Experiencing from the town are roads leading through some of Java’s most densely populated but richest farmlands to some of the oldest Hindu and Buddhist monuments in Indonesia. Some of them date back to the 7th century. The sulfur-spewing volcano, Mount Merapi, looms over the north. Also a center of education, Yogya’s more than 50 academies and universities attract students, writers, painters and dancers from throughout the world who thrive on innovative thinking and tradition art forms. 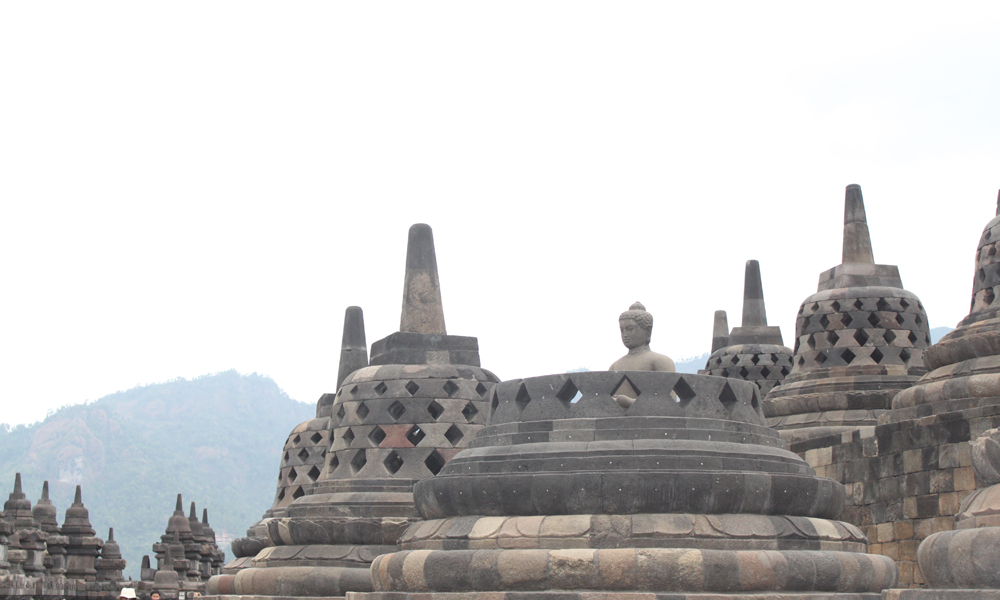 Built in the 8th century, Borobudur is one of the world’s most famous Buddhist monuments. It stands majestically on a hillock overlooking lush green fields and distant hills. Built of gray andesite stone, It rises on seven terraces each smaller than the one bellow it. The top has a great stupa standing 40 meters above the ground. The walls are sculpted in bas-relief, extending over a total length of six kilometers. 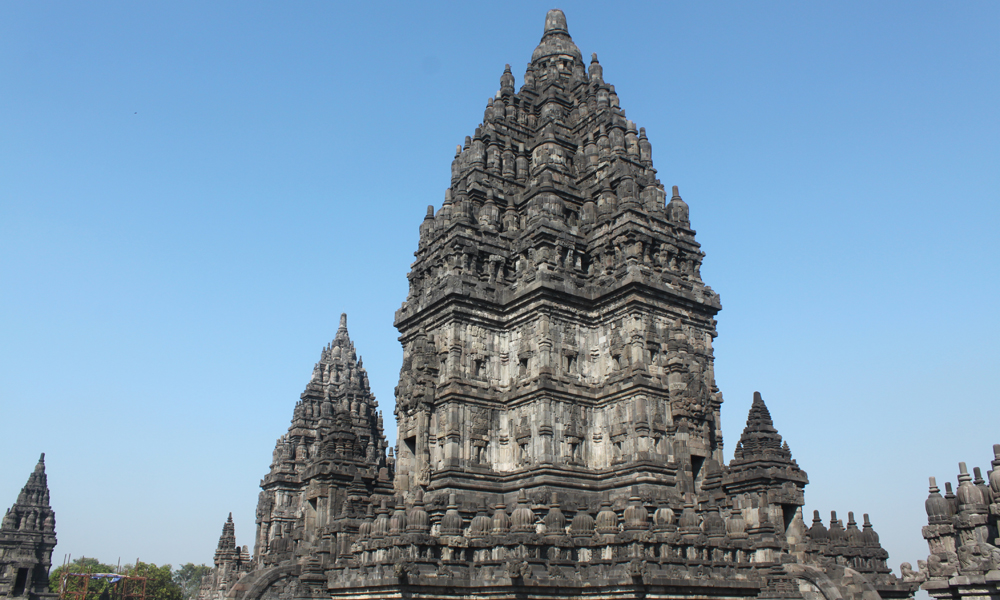 Surrounded by lush green fields, magnificent Prambanan temple derives its name from the village where it is located. Locally known as Candi Loro Jongrang or “Temple of the Slender Virgin”, it is arguably the largest and most beautiful Hindu temple in Indonesia. Built in the mid-9th century. Its parapets are adorned with bas-relief depicting the famous Ramayana story. Of its eights shrines, the three main ones are dedicated to Shiva, Wisnu and Brahma. 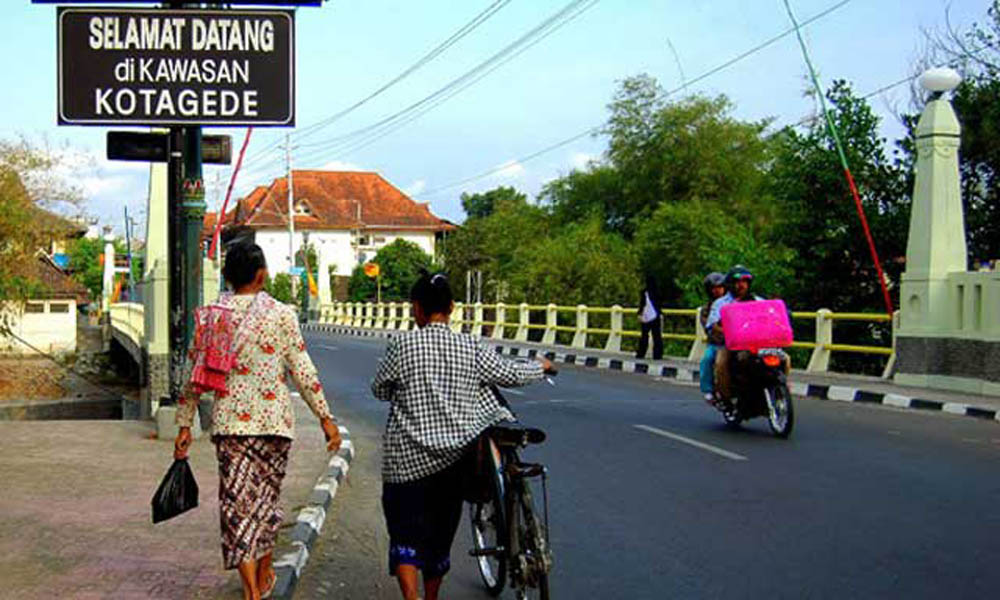 Founded in 1575, Kota Gede was historically a trading center which attracted merchants and craftsmen. Today it’s narrow streets are lined with small silversmith and souvenir shops. A royal cemetery is also located here. 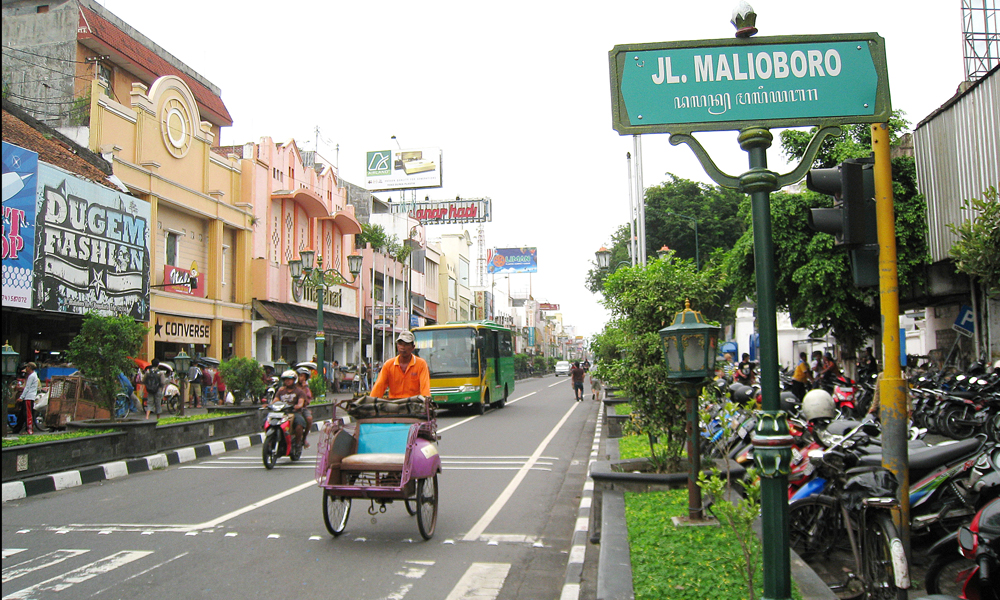 A major thoroughfare full of bustling traffic, Jalan Malioboro is the center for souvenirs and shopping in Yogyakarta. Everything from t-shirts to bamboo bird whistles can be found in roadside stalls and permanent shops. There are even gold, batik and snack shops with a huge modern shopping mall situated not very far from the Keraton 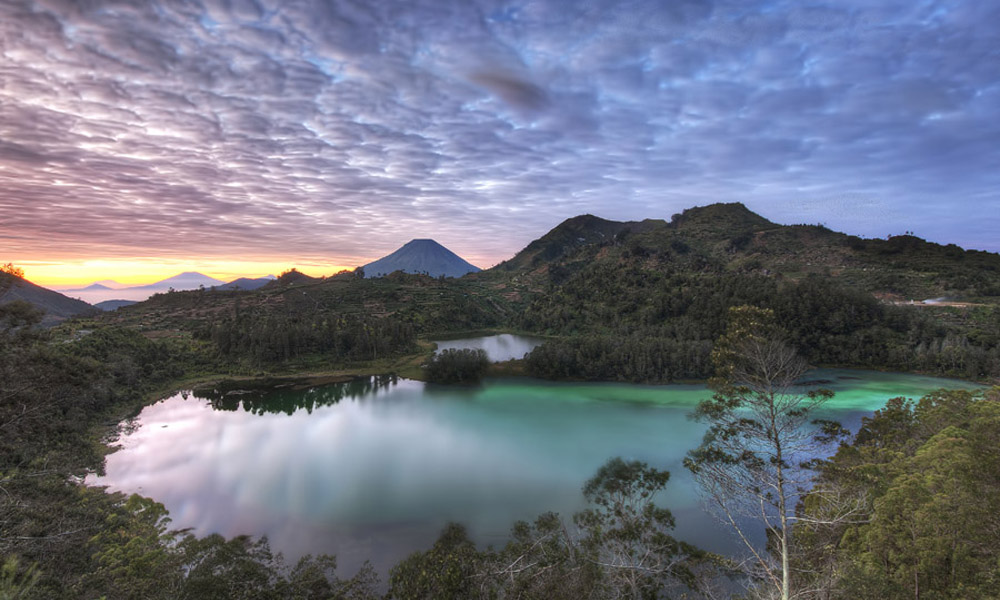 The Dieng Plateau contains the oldest Hindu temples of Java. Eights of the original 400 monuments remain, lying within an old caldera, enclosed by steep mountain walls. Standing at 2,000 meters above sea level, sulfur fumes, bubbling mud holes and clear spring lakes are reminders of the volcano’s existence. The road to Dieng Plateau passes through tobacco plantations and beautiful mountain scenery. The Kraton, the Sultan’s Palace :A grand and elegant masterpiece of Javanese architecture, the Kraton (Sultan’s Palace) lies in the center of Yogyakarta. It was founded in the mid-1700s on a carefully chosen location between the Winongo and Code Rivers. Most of the buildings are now filled with costumes, gifts from visiting dignitaries and other memorabilia. There are frequently wayang kulit (shadow puppet) shows and gamelan orchestras practicing in a pavilion in the inner courtyard.

Lombok marks the beginning point of the area known as “Wallace” where flora and fauna of continental Asian origin gradually fade out and species from Australian begin further east. The northern part of the island is mountainous and verdant with tall trees covering the land. The south and east coastal lowlands are arid and covered by savannas. At around the time Islam first came to Lombok in the 16th century, four Hindu kingdoms co-existed in apparent peace in what is now West Nusa Tenggara. At present, Hinduism is the religion embraced mostly by the Balinese population of western Lombok while the indigenous people the Sasaks are predominately Muslim 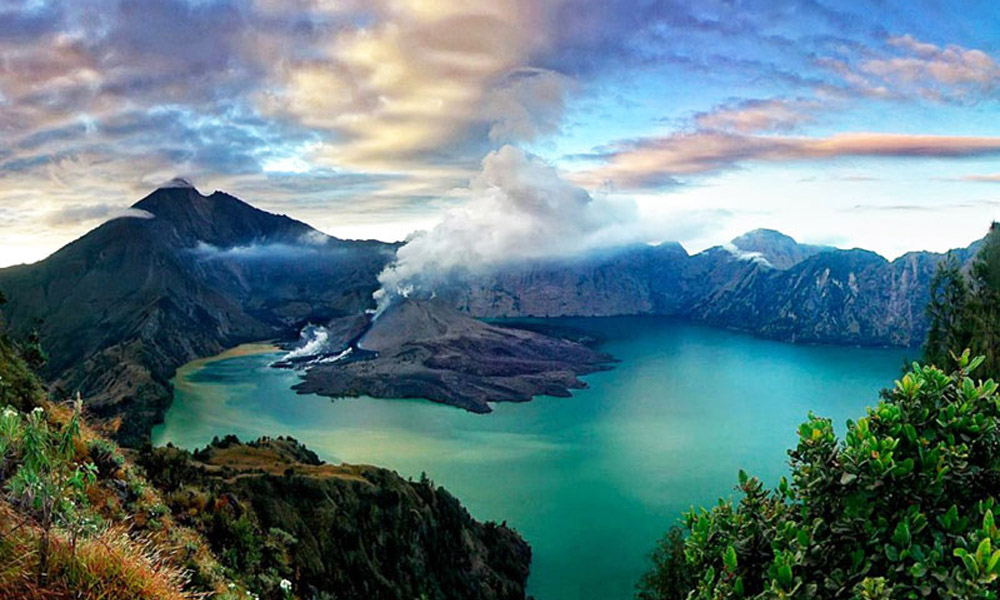 Mount Rinjani at 3,726 meters is the third tallest mountain of Indonesia. Revered by both the Balinese living in Lombok and the Sasaks, many people make a pilgrimage to the mountain each year. At the floor of the volcano’s huge caldera is the sickle-shaped crater lake, Segara Anak, surrounded by steep walls. In the lake is a relatively ‘new’ cone, Gunung Barujari which is only about 200 years old 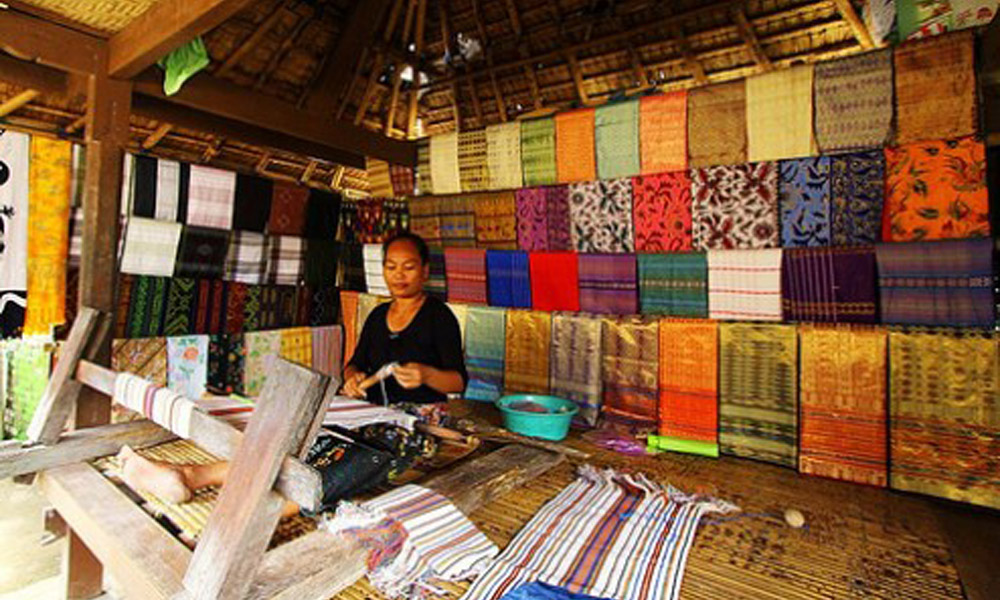 Lombok is known for its traditional weaving the techniques for which have been handed down from mother to daughter for many generations. Sukarara and Sengkol south of Cakranegara are two villages where weavers still work using simple looms making ikat cloths and bright songket cloths interwoven with gold or silver threads. 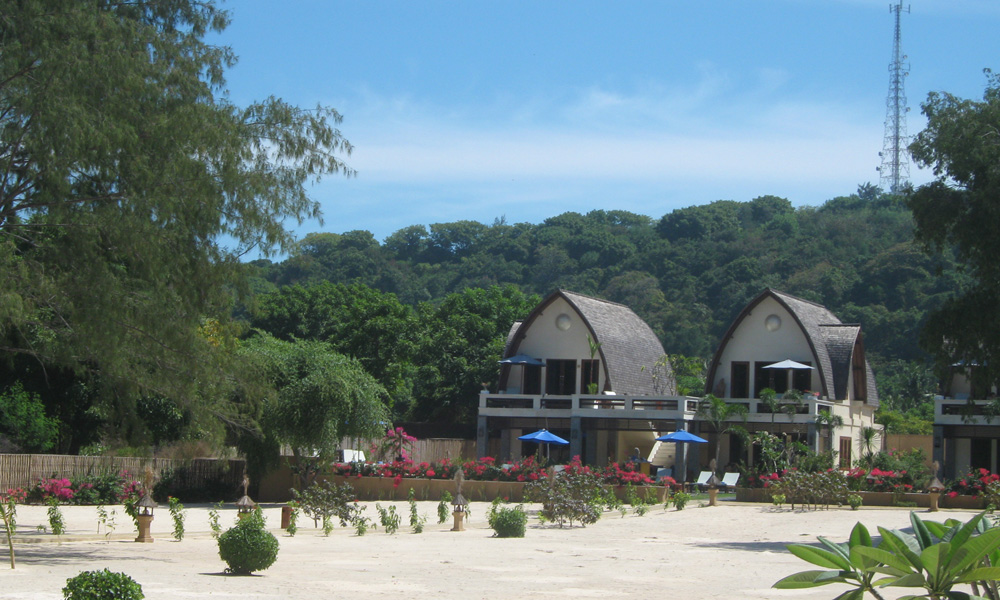 A few kilometers of Sengkol is Rambitan, a traditional Sasak village which welcomes visitors. With about 750 people in residence, there’s and old thatched-roof mosque which some people believe is among the oldest mosques in Lombok 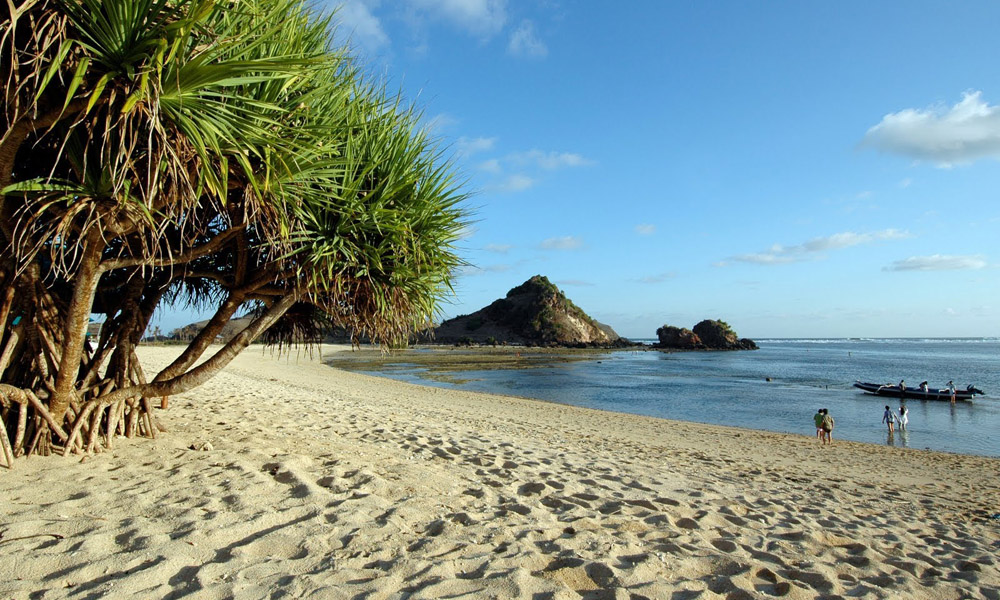 Also known as Putri Nyale Beach, Kute on the south coast of central Lombok is one of the most scenic and unspoiled beaches in this part of Indonesia. From Kute to Tanjung Aan, 5kms away, is an unbroken stretch of clean white sand abutting the Indian Ocean. It is safe for swimming and further to the west are the beaches frequented by surfers. Each year on the 19th day of the tenth month of the Sasak Lunar calendar when the nyale worms come to the sea’s surface, Kute beach is the site of great festivities. 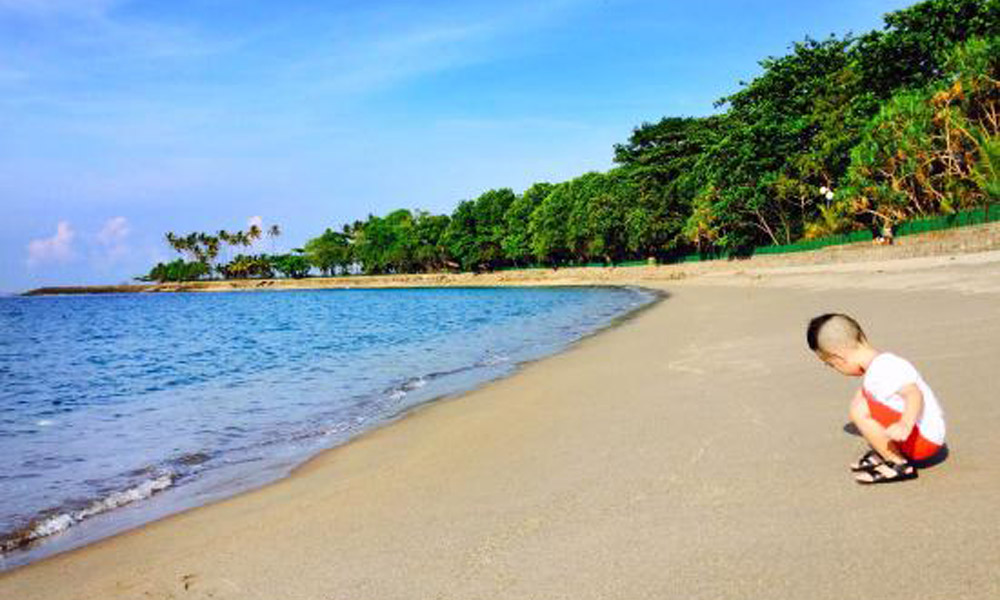 Most of Lombok’s wide range of hotels, resorts and restaurants are located along the several kilometer long stretch of white sandy beaches at Senggigi. About 30minutes away by car from the Mataram airport and located on lombok’s western shore. It is an ideal base for exploring the island. The sunsets over the beach are not to be missed 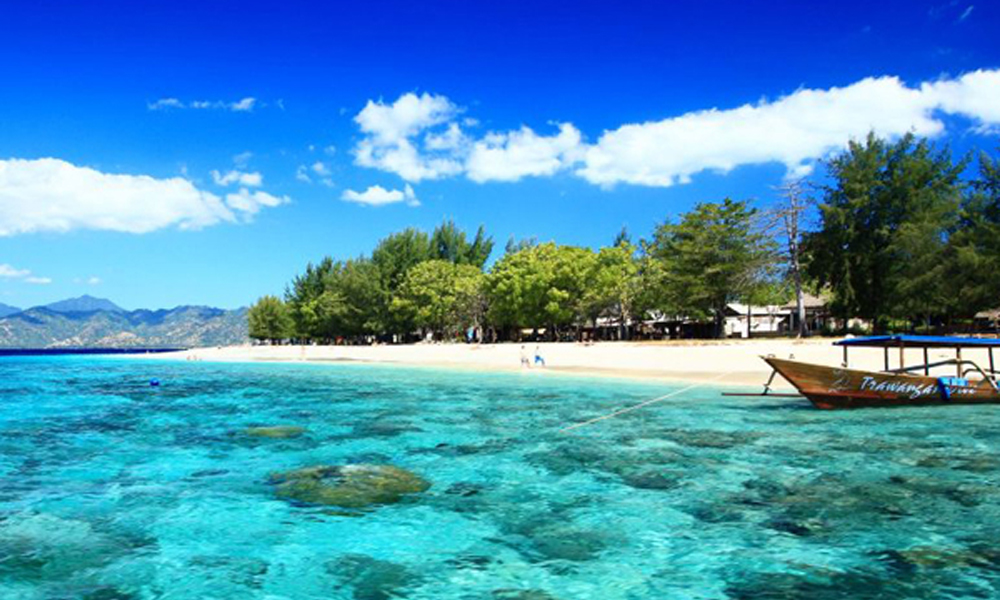 In the Sasak language gili means ‘island’. Gili Air, Gili Meno and Gili Trawangan are clustered together just off the northwest coast of Lombok. Coral gardens abound in the clear waters around the islands attracting huge varieties of fish. All three have great beaches and attract snorkellers, divers and visitors who enjoy the isolation and want a more relaxed pace during their holidays.

Sulawesi is an orchid shape island lying between Kalimantan (Indonesian Borneo) and the Malukus. Covered mostly by rainforests and mountains, its ethnic groups and flora-fauna are different from any other island in Indonesia

The provincial capital of Ujung Pandang has in history played an importance role as a gateway to the former kingdom of Gowa and now to the whole provine because of its natural harbour. The center of business and administration. The center of business and administration, the city has expanded outwards from iths most important landmark that of Benteng Ujung Pandang wich faces sea front.  In south Sulawesi, Makasar is the home of the Bugis and Makasarese tribes. Famed for centuries for their seafaring heritage, they were shipbuilders and adventurers. The Buginese were once the most feared pirates of the seas and are still known today for their unique pinisi schooners which can be seen throughout the archipelago 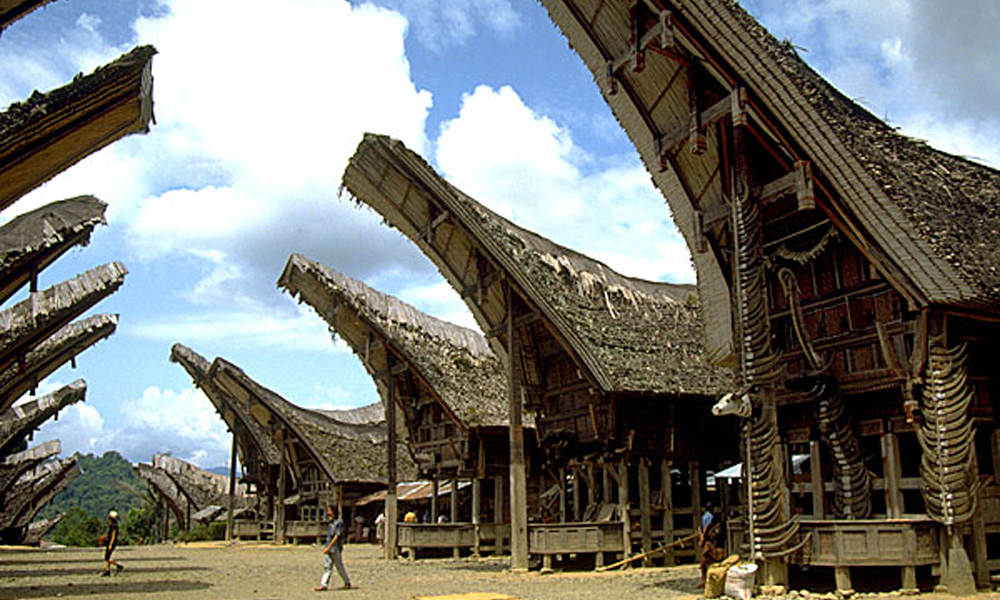 Further north through rugged country is Tana Toraja, often referred to as “Land of the Heavenly Kings’. Believing that their forefathers descended from heaven into a mountain some 20 generations ago, the Torajans have a unique culture and ancient traditions. They are renowned for their unusual architecture and funeral ceremonies, their gravesites placed high in the hills and guarded by wooden effigies (tau-tau).The centre of tourism is Rantepao, 328km from Ujung pandang by road.